← more from
Organ Grinder Records
Get fresh music recommendations delivered to your inbox every Friday.
We've updated our Terms of Use. You can review the changes here.

I dreamt I was a hammer & everything was glass

by The Monroe Transfer 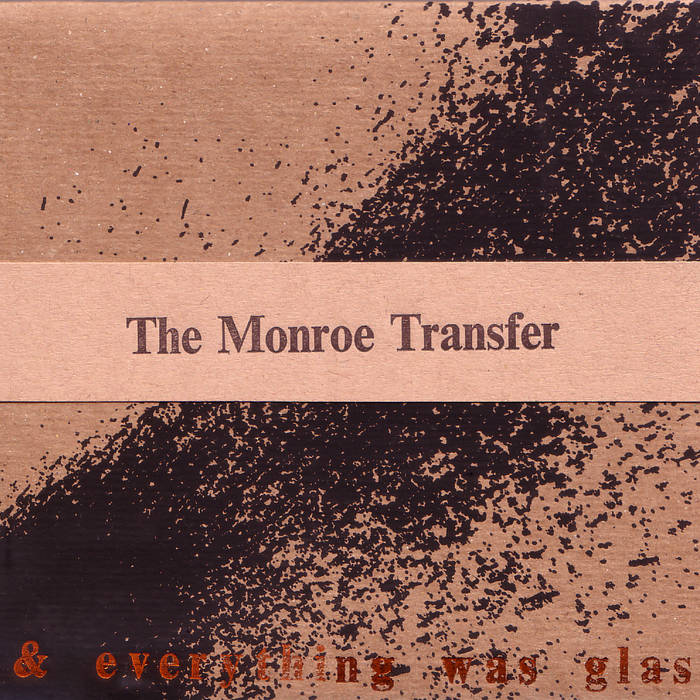 johnh76 I saw the bands last ever show at a Penny Black Music evening in London when they played Frozen Fields, Burning Fields from their Trials album, which I bought and have been playing regularly ever since. . Mesmerising stuff. This dream piece is just as good..

Sven B. Schreiber (sbs) This 20-minute symphonic post-rock epic develops slowly, but mighty, finally revolving for some time around a basic 7/4 theme through various transformations - much like Johann Pachelbel's famous "Canon in D". Like several other interesting albums I purchased recently, I found this one in Carsten Pieper's collection.

Carsten Pieper Fascinating long instrumental track. If you like Godspeed You Black Emperor or Sigur Ros' sound sculptures you might want to give this one a try!

Written around the same time as the sessions for ‘Electric Old Wire Noise’ but, due to time constraints, we couldn’t record it at the same time; thanks to line-up changes and other demands on our time, we’ve only just been able to record it properly. The title came from a very brief dream Nick had while half-awake one morning and, essentially, is the shortest description of that dream.

The music itself is an attempt to capture the knowledge that there are so many things wrong with the world, and that everyone has the ability to change those things; however, it might be that violence and destruction are the quickest routes to that change, and that route would defeat the entire point of effecting a change. It’s an attempt to capture the feeling of powerlessness at the cyclical nature of human politics that, while appearing to change, often means that the powerful remain in control. It’s a 20 minute song that brings each of the instruments in individually, moving through a number of minor key, atmospheric sections before settling into a heavy 7/4 beat. After a re-statement of one of the opening melodies on the violin, everything falls apart into sparse noise under a repeated string motif, before the 7/4 section comes back in with a vengeance, building up to a noisy, staccato ending.

A while ago, we were thinking of accompanying our shows with live film- it kind of fell out of favour as an idea, largely because we wanted the music to stand on its own. A lot of our music is quite complex, and densely orchestrated, and we hope it rewards close listening; a lot of the time, constant visual stimulus would only serve as a distraction, rather than an enhancement. Having said that, we were fortunate enough to find the amazing animator Gemma Burditt, who was enthusiastic about making an animated film to accompany this particular song; that film forms the DVD part of the release. From the song’s title, and from the feel of the music, Gemma took the idea of cyclical exchanges of power, and “eye-for-an-eye” exchanges, and created the film based around two co-exisiting races in a seemingly post-apocalyptic world. Since we’ve had nothing to do with the creation of the film, we can be totally objective in saying that the film is powerfully moving, and absolutely beautiful.

As ever, we’ve tried to make the packaging something quite special. The artwork has been all been printed by hand, using silk screens, a 50 year old letterpress machine (for the credits and card band on the outside), and an antique hot foil press (for the copper foiled lettering across the front). We take quite a lot of pride in the presentation of our CDs; in the current musical climate, if you’re asking someone to buy a physical copy of something, we think you really have to offer them something special.

We’ve performed the song live on Resonance FM; in fact, this was not only Rhiannon’s first gig with the band, but her first actual live performance as a musician. And the song opens with solo violin. Anyone for adrenaline…?

‘A stunning, sumptuous, symphonic ‘single’, ‘I Dreamt…’ is twenty minutes of escapist elegance, underpinned by the truest instrumental drama. Suffice to say it’s the least typical single in this round up, taking a cue or two from the post-rock magnificence of Japan’s Mono but building to the kind of heart-melting crescendos that are solely reserved for the most euphoric of skin-tingling live experiences. Its elements of motif repetition may offer a nod to kraut influences, but this is far grander than any revivalist fodder, pointing to a future where classical facets sit pretty alongside accessible ‘pop’, relatively speaking, superstructures. The release comes with a bonus DVD, too, featuring an animated film. All told, a pretty essential package’ (Clash Music)

‘London is a funny old place. It’s a true cultural melting pot of greedy bankers and illegal immigrants, artists and vagabonds, and a healthy dose of depravity and opulence. You can find anything and everything there, and sometimes the Capital’s domineering presence can give birth to a true gem, as is the case with seven piece Londoners, The Monroe Transfer. ‘I Dreamt…’ is a slow boiler of a song. It paces itself, never meticulously, but like a finely crafted Hitchcock shot. It teases and builds, exercising the imagination to a point where the song begins to write itself in your head. A slowly drawn violin melody toys with the listener throughout the track. It patiently goes from sweet and innocent to a much more sinister, shocking sound that creates a journey of emotions that can leave you feeling sorrow or joy at every one of its slight twists. Halfway through and a shift in tone is brought about by Dave O’Brien’s resounding double bass. Drums suddenly make their presence known, and a staccato guitar riff is injected creating a sense of panic and forbearing. Really, it’s token post-rock fare – start slow, build it up gradually, before exploding into a crescendo of noise and rage which overwhelms the listener. I should be bored of it, I should find it formulaic and tedious, but every single time I listen to the piece I’m drawn in, falling completely head over heels for it despite its obvious patterns. Just like a couple completely infatuated with eachother will overlook the fact that every human follows the same blueprint, there’s still something special that makes that person unique and special to them. Don’t be alarmed, I’m not recommending that you start sleeping with the delicate packaging of ‘I Dreamt…’ but I do think the album has something that, despite its reliance on classic post-rock structures, make it a wonderful listening experience. There’s no denying it – The Monroe Transfer’s seventh release is a beautiful piece of work, and is exactly what the seminal Godspeed You! Black Emperor might be doing today if the word hiatus hadn’t been invented. Their attitude (they believe, rightfully, that DIY doesn’t have to mean badly made) is remarkable, and we need more of it in this world’ (The Line of Best Fit)

‘…a new piece of music that laughs in the face of record-releasing convention. Is it a single? An EP? A mini-album? The answer is none and maybe all of these. I Dreamt I Was a Hammer and Everything Was Glass is a one track, 19-minute instrumental epic from The Monroe Transfer, smartly presented in a handmade cardboard CD sleeve. Like the sleeve, the music inside is carefully and skillfully crafted by people who clearly love what they’re doing. The CD is accompanied by a DVD which contains an animated video which tries to offer a visual interpretation of the sounds using photo collage and drawings. From that you won’t be expecting anything flashy or fast moving. Like the music, the visuals are simple, yet powerful and they take time to slowly unfold, telling the story of… well, I’m not sure what exactly the story is. But I don’t think that matters. Like the music, it’s a piece of art to be experienced, not understood. And if it’s a little strange, that’s OK too’ (The Daily Growl)

‘Instrumental magic that will leave you on cloud nine. The music that accompanies the skill and craft of the handmade presentation sleeve is produced in such a way that will both intrigue and capture your imagination. With it’s meticulously constructed music, and simply empowering overtones, ‘The Monroe Transfer’ have smashed this album into a million shiny pieces, each one reflecting small segments of brilliance in every thinkable direction. Without a singer in sight, this orchestral, instrumental masterpiece grabs your attention with its flowing melody and may even leave you speechless when the twenty minutes of adulation ends.The excitement doesn’t end here however, as hidden away inside the sleeve is a bonus DVD which holds within it an animated video by Gemma Burditt which was a year in the making. The only way to describe the album is sheer genius at its best’ (Subba Cultcha)

‘The Monroe Transfer’s 15 minute post-rock epic ‘I Dreamt I Was a Hammer and Everything Was Glass’ bears celestial arrangements and sense of grand scale; spidery bass creeping over mournful strings and resonant double bass, building purposefully to an almighty crescendo. Their sound can seem pretty retro at times, mirroring as it does the late 90s/early-00s output of Constellation Records, but this is an EP of genuinely, noticeably high quality; the flawless musicianship and austere sound palette lends itself to their sense of relentless, creeping drama. It would be nice to hear The Monroe Transfer stretch themselves sonically in future, but perhaps it wouldn’t suit them to do so; for now, this is a fittingly weighty summation’ (Fireworks Night In Amusia)

Engineered & produced by Ed (with slight help from Nick); recorded at Jamestown Studios, London and ADP Studios, East Sussex in 2008.

8-piece instrumental group, scattered across the UK and struggling to make things work.